How to be a Political Scientist in 10 Easy Steps

This is the first in a series of guest posts by Nate Monroe.

In his blog post, “Teaching Theory and Inference (aka ‘Science’) to 1st Year PhD Students,” Will aptly described the motivation for and logic behind our jointly designed PhD course (At UC Merced, the course is formally called “POLI 200: Research Design in Political Science,” though I probably prefer a broader title like “The Science of Politics” or “Scientific Inquiry into Politics” or “How to be a Political Scientist in 10 Easy Steps”). I’d have been more than happy to let Will speak for both of us as he blogs his way through the course this semester; we seem to disagree very little when it comes to our approach to doing this job—at least as far as I can tell so far (Stay tuned). But he’s invited (coaxed?) me into my first adventure as a blogger. 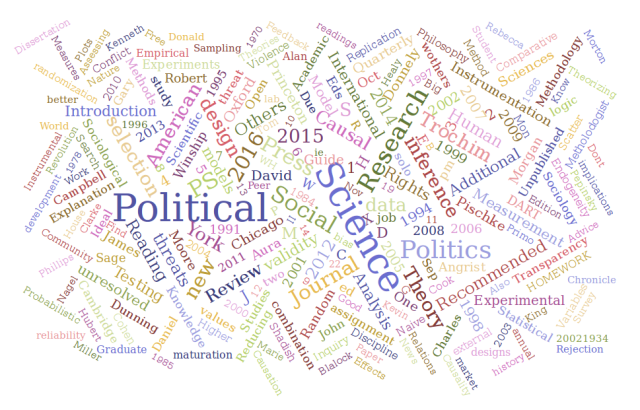 I’ve taken his bait, at least on a trial basis, and I’ll be writing “addendum” to his posts each week. Mine will be lagged by at least a couple weeks; our semester started a week after Arizona State University, and Will dutifully rescheduled his labor day class for the next day. I forgot to do so because I spent the day fishing (students taking my course will catch up during our final exam week).

Unlike Will, who took a decade off from teaching the intro PhD course, I’ve taught it three of the last four years. My previous syllabi included many (but not all) of the topics that we include in our current syllabus, but the bulk of my old version focused on (was preoccupied with?) causal inference and various methods for pursuing that end.

I still think causal inference to be a worthy endeavor. But as I taught the course several times, tweaking it a little here and there, I was bothered by the nagging feeling that there was a mismatch between the emphasis in the course and my own belief about the import of different parts of the social scientific process. In particular, I’m a bit of a theory monger (my colleague, Emily Ritter, likes to parody my mongering by pointing out that virtually every comment I ever make in a workshop boils down to something akin to, “So… What I think you need here is a theory…”)

I see theory as the heart of what we do. To be clear, I do not think that all theories need be formal (though I’m often drawn to such models), nor do I think that every paper must have a theory, new or old. But I do tend to think that theory is the center of gravity for social scientific inquiry. When I encounter a really great paper that develops a brand new measure, I never think, “This paper should really have a theory.” But I do tend to judge the value of even a measurement paper by asking whether the proposed measure will improve our ability to test an implication of some well-specified, clearly-stated theory. As far as I’m concerned, all roads lead back to or forward towards theory. My PhD advisor, Mat McCubbins, probably deserves a fair bit of blame for my theory zealotry; please direct all complaints to him.

Last spring, in anticipation of teaching our intro PhD course a fourth time, the nagging feeling finally got bad enough that I decided to spend a few precious summer days redesigning my syllabus. At about that time, Will came to campus for a conference on Courtenay Conrad and Emily Ritter’s book manuscript, and he and I spent the better part of the drive back from Yosemite banging our fists in agreement about all that is right and wrong in political science. As a result, I suggested we redesign our syllabi—our syllabus—as a team.

To my great satisfaction, our redesign sessions not only affirmed my instinct to expand and prioritize the role of theory in the course, but it brought about new ways of thinking about old topics. To my mind, the flow from ontology to scientific method to theory is much clearer now; the categorization of various inference strategies is more logical; and the nuts and bolts of measurement are far more complete than I could have done on my own (for my money, there’s no one better than Will at thinking about measurement). Perhaps more than anything, I’m now thinking of (and teaching about) social science as a true community endeavor.

A final caveat: the course we designed is our best attempt to begin the training for students in political science PhD programs, given our strengths and perspectives. It’s certainly not the only way to do it, and of course there’s plenty of room to debate whether it represents an improvement over other approaches. But, inasmuch as others find it useful or helpful, I would be glad to discuss the logic and logistics that might help you adapt the course for your purposes (and of course share all of the relevant materials).

Thanks for enduring my maiden blogging voyage. I’ll be back for next week’s topic, pending Will’s approval.

I am a political science professor who also contributes to Political Violence @ a Glance and sometimes to Mobilizing Ideas . Twitter: @WilHMoo
View all posts by Will H. Moore →
This entry was posted in NM's Posts, Theory & Inference Course. Bookmark the permalink.