Revisiting Some Thoughts on Liberty & Terror

Today has made salient a series of posts I wrote back in October 2002, reflecting on the status of rights in post Patriot Act America.  First, my employer evacuated my building for two hours today in response to false alarm about a possible bomb.  Second, the FBI is investigating the “radicalization” of the San Benardino couple who slaughtered more than a dozen people at the Inland Regional Center earlier this week.  Third, an attorney for the family of the shooters is denying any “links” to groups that are using terror attacks to press their claims (e.g., DAESH). 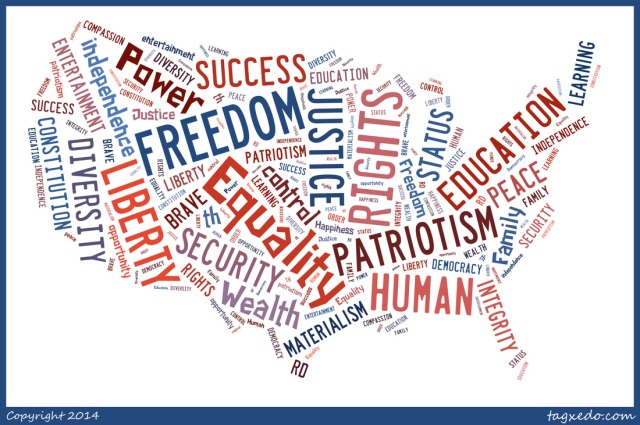 The site where I posted them is now defunct (but archived here).  I repost them because they feel more important now than ever.

Once upon a time a great nation became locked in a struggle with another powerful country over the manner in which both domestic and international politics and economics were structured. Afraid that national security might otherwise be compromised, the government of the great nation assigned police the responsibility of finding those who secretly supported the powerful country. An ambitious and earnest legislator held investigative hearings, during which he exposed many people for sympathizing with the enemy. Civil libertarians lamented the absence of due process. But the people of the great nation read of the arrests made by the police, and the hearings held by the legislature, and were relieved.

Given US Federal, State, and local governments’ efforts to find the terrorists in our midst and prosecute them for “providing material support to terrorist organizations,” I cannot help but wonder whether I am free to…

What is a Link?

There is much discussion these days about “links.” They are not hyperlinks, but connections between people and an organization. Media reports indicate the prosecution of several alleged Al Queda members hinge on the fact that the phone number of other Al Queda members turn up in the redial or auto-dial functions of these peoples’ phones. Further, White House personnel and legislators frequently refer to “links” between a given person and Al Queda when justifying a given policy action.

I do not doubt that many, if not most, of those charged are, in fact, members of Al Queda. I am, however, concerned about the use of the term “link” in all of this. I have yet to see someone in the media ask for clarification–I read or heard far too many reporters fail to ask for an explanation of what a link is.

The Dirty War of the 1970s casts a pall of shame over Argentina. Nobody disputes that. And while we are, to be sure, a far way from the level of government abuse and human rights violations of the Argentine junta, I for one am troubled by an important similarity. During the Dirty War the major mechanism used by military investigators to identify people to be picked up for questioning and, in all too many cases, disappeared was the presence of that person’s address or phone number in the address book of someone who had already been picked up for questioning. The junta was seeking to root out what they believed to be a cancer on their nation: a conspiracy of communists who hid among the Argentine people. So they searched for links.

Today in the US there is some discussion about striking a new balance between freedom and security. But the discussion is mostly empty; so general that it is vaccuous. Perhaps this will help. Do we want to protect the rights of every citizen (and, perhaps, non-citizens), or are we willing to allow some citizens to be falsely imprisoned? How many false imprisonments are you willing to trade for some additional security? One, ten, one hundred, one thousand? And what precisely is the argument that by lowering standards for arrest, prosecution and incarceration we will become more secure?

Finally, what do your “links” suggest? Surely you have seen the interviews of a friend or neighbor explaining that he could not believe that his friend or neighbor could commit a murder; rob a bank; or what have you. People who commit crimes do not have it tatooed on their forehead. 19 men who hijacked planes on 11 September 2001 lived in the US for over a year, and they had friends and neighbors who never suspected. And so I ask: “What makes you so sure that you are not ‘linked’ to someone who will be investigated; prosecuted; found guilty in the new, more secure America?”

I submit that a “link” is a cause to investigate, but it is not evidence on which a court case should turn. Nor is it evidence that we should accept as cause for military action when our elected officials use it as justification for such a policy behavior. We must hold preosecutors and politicians to a higher standard. We must take our journalists to task for failing to press politicians when they refer to links. We must ask: “What is a link?”

Finally, I posted this in October 2001, and it seems even more relevant today.

A personal sentiment: liberty and freedom require tolerance; bigotry erases liberty and freedom. Some intolerant white Americans are exhibiting their bigotry and hatred by harassing and threatening Arab-Americans, those of Middle Eastern or South Asian origin, or Muslims. I urge you to ask yourself whether you are not involved. A tolerant, free society cannot be sustained if we remain silent in the face of bigotry. I urge you to register your protest against this sort of intolerance by some of our fellow citizens: they bring shame on our nation.

Today I posted this on Faecbook.

Funny thing: ideas/beliefs are not disease. One does not “catch” them. It follows that “radicalization” is not a thing. It is a pejorative political label for a process that does not exist. It is used in conflict/politics because to describe the process by which a human being learned (i.e., came to know an idea or belief) is neutral, and neutral presentation is bad in conflict/politics. It runs the risk of presenting one’s opponents’ ideas/beliefs as legitimate. The entire point of freedom of conscience (freedom to hold and advocate ideas, beliefs, opinions) is to limit government’s ability to harass, detain, incarcerate, etc. on the basis of ideas/beliefs.

I am a political science professor who also contributes to Political Violence @ a Glance and sometimes to Mobilizing Ideas . Twitter: @WilHMoo
View all posts by Will H. Moore →
This entry was posted in Uncategorized and tagged FBI, Freedom of Conscience, Freedom of Speech, Patriot Act, San Bernardino Terrorrism. Bookmark the permalink.