A Quick Bit on the DA-RT Kerfuffle

Regarding DA-RT: Are we better off or worse off, as a species, for the Convention Against Torture?  It may surprise many that I am not terribly sure.  It’s a tough question to answer in no small part because there are lots of counter-factual CATs that might have existed had they delayed its approval and had more discussion.  And it is hopefully surprising to nobody (and here I am not a cynic, but a Pollyanaish fool) that those who opposed the CAT back in 1984 did so for diverse reasons ranging across views such as

and so on.  Some may view these reasons as insincere, ill conceived, etc.  They may also view those who championed the views as shills, vapid, or otherwise disparage their character.  I sincerely hope they would not view them as a monolith, but since I study conflict processes for a living, I am familiar with the standard psychological processes such as “image of the enemy” and so on.  So hand me those rose tinted glasses, damnit, because I don’t like what I am seeing.

Having said that, what is my position on the DA-RT initiative?

For those who prefer (poor) graphic presentations… 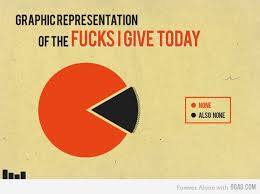 And finally, for those who dislike abstract and numeric math (frequently, and maddeningly, referred to as qualitative types)…

Why no fucks?  The short answer, is

(1) I don’t think herding journal editors is the best mechanism in which to invest energy;

(2) I think that attempting to herd journal editors may well maximize blowback; and

(3) I have reached my life limit on reading nonsense by insincere hacks who wish to protect their incomes and that of their offspring (some of those signing the petition and writing about it fit this description), and am thus unable to credibly commit to becoming informed.

For what it is worth, I did skim/read most of the DA-RT Working Group‘s publications and websites as the project moved forward between 2011 and 2015 (e.g., here, here, and here, among others).  So while I have not read neither the JETS statement nor the petition to pause, I have a reasonable sense of the former

That said, I do give a fuck about transparency in science, and standards of data collection in particular.  Indeed, Christian Davenport and I successfully sought NSF funding, held two Workshops, and produced a document that declares a set of Standards & Best Practices for collecting conflict data (PDF here).  You might be interested to read it.

And with that, I leave you so that I can finish the revisions to a submission that I have been lamely sitting on.

I am a political science professor who also contributes to Political Violence @ a Glance and sometimes to Mobilizing Ideas . Twitter: @WilHMoo
View all posts by Will H. Moore →
This entry was posted in DA-RT, Data Standards. Bookmark the permalink.

1 Response to A Quick Bit on the DA-RT Kerfuffle