Today I had an hour long conversation with Erica Chenoweth and Christian Davenport about #CharlestonShooting, #BlackLivesMatter, our responses to such, and what we might do to contribute to reducing systemic racism in America.  You can watch it on YouTube.  Fair warning: my mug is Full Screen the whole time, which is irritating.  But this sort of thing happens when you are a DIY producer with no skills.

I asked them to join me in an informal conversation because I was struggling to find a positive path forward.  I have some ideas for how to make change in the medium to long run, but for right now?  For me the problem is white folks.  My people.  Friends, family, colleagues, acquaintances, neighbors, etc.  Most of us decry violence, regardless of the race of the target, but precious few of us white folks connect the dots between systemic racism and specific events such as the #CharlestonShooting, #McKinneyPoolParty, #FreedieGray, #Ferguson, #BlackPoverty, and on, and on, and on.  Almost none of us take the status quo as a problem that affects us personally.  And that is the problem I want to address. 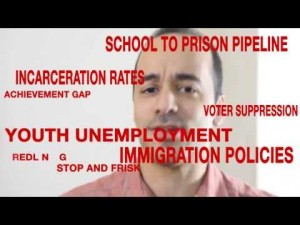 If you check out the video you will learn that none of us have answers.  We share some thoughts, kick around some ideas, hopefully offer some useful perspectives, and leave plenty of questions unasked and topics unaddressed. But it is, perhaps, a start.  And perhaps you will decide that you want to start your own conversations, or perhaps join ours.

Erica pitched the two of us about starting on online reading group where folks can gather once a month to discuss something from the #Charlestonsyllabus in a safe space.  If you would like to participate, she’ll post more details on her blog, and we’ll also post information on Conflict Consortium.  So I am pretty excited about that.

And I want to share here several works that helped me abandon my veil of ignorance about systemic racism in the US.  My formal education left me gallingly ignorant of what is frequently mislabeled Black History: it is American history–the Black History label is apropos for documenting the history of black experience, but poor to describe the interaction between white and black folks.  That history tends to be reduced to “Slavery–the Civil War & Emancipation–Jim Crow–The Civil Rights Movement.”  And it is a narrative about “the progress of white America,” which makes “racism” a thing of the past, and especially something we can blame the American South for.  Frankly, it is a bullshit story, “truthy” in the high points that it hits, but one that leaves white folks poorly positioned to understand “race in America.”

These, then, are works that helped me learn about what I was not taught in school.  Perhaps you will find them useful to you.

Isabel Wilkerson The Warmth of Other Suns

Spike Lee Do the Right Thing

[2] Think about the Black Panther Party and Malcolm X as you engage this.

I am a political science professor who also contributes to Political Violence @ a Glance and sometimes to Mobilizing Ideas . Twitter: @WilHMoo
View all posts by Will H. Moore →
This entry was posted in Uncategorized and tagged #BlackLivesMatter, #CharlestonShooting, Systemic Racism. Bookmark the permalink.

1 Response to Discussing #CharlestonShooting, #BlackLivesMatter, and Systemic Racism, US Stylee