The Honor Narrative in Contemporary US Advertising

One of the unfortunate externalities of my penchant for American football is the advertising that accompanies the television broadcasts.  While beer commercials are generally the primary venue for misogyny (e.g., here, here, and here), and sexist depictions of women are a staple of all advertising, two companies that are currently purchasing lots of air time during the NFL and college Bowl games generate their “humor” by leaning heavily on the viewer’s agreement that an American father’s honor is at stake when it comes to his daughter’s sexual activity.  Actually, I wrote that poorly.  My version gives the young woman agency.  Silly git.  She is an object in this drama.  After all, sexual activity between a young man and a young woman is nothing more than a cat and mouse competition between her suitor and her father; one in which the old man’s honor is at stake and the young man hopes to “get some” and then “get away” like the fictional protagonist in Aerosmith’s “Sweet Emotion.”

Taco Bell, of course, is targeting young male consumers, and thus offers us “Getaway,” championing the daring, develish young stud who “bags the girl,” but when “caught” by parents arriving early is able to snatch up his grilled, stuffed nacho, and streak off into the night, sated and unharmed.

Buick is marketing its Lacrosse to suburban dads, and in “School Dance” one such dad is driving his pubescent daughter and her date to a middle school dance.  This is how Buick describes their spot:

Dad’s current playlist reads contains easy listening and heavy lecturing with such classics as “You Can’t Touch This” by MC Hammer; “I’ve Got Eyes Everywhere” by T-Booth & The Sensations; and “Keep Your Hands to Yourself” by The Georgia Satellites. Thanks to InteliLink there is no need for dad to hold back on indulging his love of 80’s music while benefiting from Satellite radios ability to help him send a message to his daughters date with absolutely no distortion and crystal clear clarity. 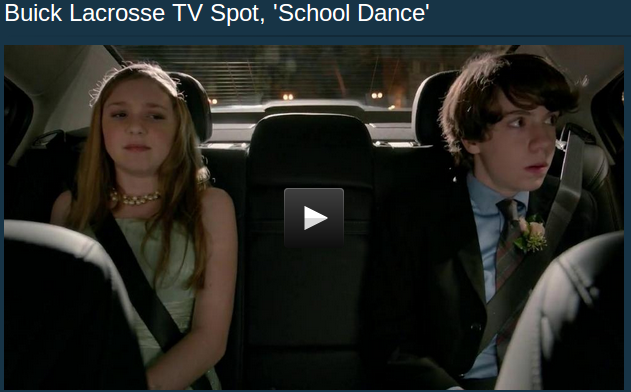 Young man is suitably intimated while daughter endures her humiliation

It is common among those of us in the West  (and appropriate!) to decry honor killings (e.g., see here and here), which we tend to view as a “backward” practice carried out in “traditional” societies (e.g., see here, here, here, and here; NB: several of those links have Islamophobic content).  It is less common for us to recognize that the primary necessary attitudes that support such a social practice are sufficiently alive and well that major corporations appeal to them in highly visible advertising campaigns that are very widely consumed.[1] And the telling part: not only do few notice, even fewer object.

[1]  To be sure, killing a woman who has “dishonored” her father (family, community) by engaging in sexual relations (much less being the victim of a sexual assault) is not only illegal throughout the West, but more importantly taboo.    But that is only a part of what supports a culture of honor killing.  Another foundational component is a widely shared attitude that sexual activity by an unmarried women dishonors her father (family, community), and this is precisely the attitude the advertising firms that pitched “Getaway” and “School Dance” are appealing to.

I am a political science professor who also contributes to Political Violence @ a Glance and sometimes to Mobilizing Ideas . Twitter: @WilHMoo
View all posts by Will H. Moore →
This entry was posted in Uncategorized and tagged advertising, beer, buick, honor, misogyny, rape culture, taco bell. Bookmark the permalink.