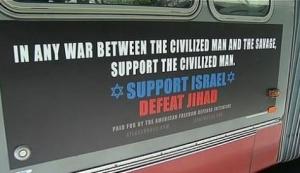 What is one to make of privately funded bigotry in public places, especially when it is carried on a publicly funded space such as a public transportation vehicle?  Here’s an AFDI billboard  also in New York:

Are you offended?  Good.  You should be, in my opinion.  And, in my opinion, you should share your view with others, thus contributing to the public square and helping define what is bigoted and what is not.  You might also want to know something about the people behind the campaign.  Check out the AFDI website, and the Wikipedia entry for its Executive Director, Pamela Geller.

But what about a billboard company’s discretion to decline to accept a client’s business?  Does my freedom of speech imply that a private company that produces publicly accessible information must take my business if can pay?  And how does the issue change when the provider of advertising space is a government entity?  Well, a court will offer us a ruling in the near future: Ms. Geller has posted about a law suit brought on AFDI’s behalf against the Washington, DC Metro System’s decision to decline to accept her business.

And with that, I leave you with Ice-T’s response to Tipper Gore’s effort to restrict what could be said on a record / cd / tape (which led the industry to self regulate and put Parental Advisory stickers on art that some might deem offensive): Freedom of Speech. That Ice-T is now a TV cop is an endless source of amusement for me.

I am a political science professor who also contributes to Political Violence @ a Glance and sometimes to Mobilizing Ideas . Twitter: @WilHMoo
View all posts by Will H. Moore →
This entry was posted in Uncategorized. Bookmark the permalink.